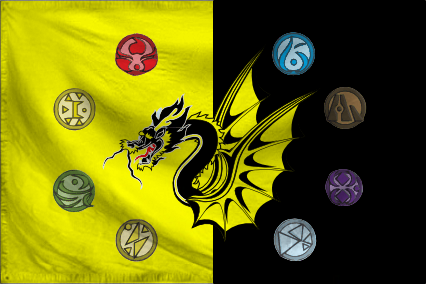 The Drakon Monarchy of Dyste is a gargantuan, safe nation, ruled by Queen Tynah Blackfang with an even hand, and renowned for its daily referendums, punitive income tax rates, and devotion to social welfare. The compassionate, democratic population of 22.752 billion Dystans enjoy extensive civil freedoms, particularly in social issues, while business tends to be more regulated.

The large government prioritizes Education, with Welfare, Social Policy, and Environment also on the agenda. It meets to discuss matters of state in the capital city of Valitora. The average income tax rate is 58.9%, and even higher for the wealthy.

The enormous but inefficient Dystan economy, worth a remarkable 1,127 trillion Dystan Silver Pieces a year, is dominated by the Book Publishing industry, with significant contributions from Cheese Exports, Basket Weaving, and Woodchip Exports. State-owned companies are common. Average income is 49,542 Dystan Silver Pieces, and distributed extremely evenly, with little difference between the richest and poorest citizens.

Badminton was recently banned due to 'unacceptable violence' inherent to the game, people reciting Shakespeare have become a common sight, an increasing percentage of the population's youth have homosexual parents, and citizens are allowed to rise or fall based on their own merits. Crime is totally unknown, thanks to a capable police force and progressive social policies in education and welfare. Dyste's national animal is the Wind Drake, which frolics freely in the nation's many lush forests, and its national religion is The Order of Bahamut.

Dyste is ranked 97,670th in the world and 28th in Mystria for Most Subsidized Industry, scoring 937.44 on the Gilded Widget Scale.