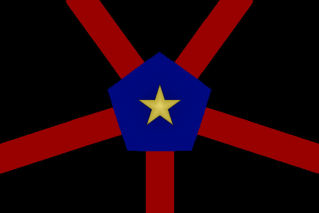 The Grand Pentad
Drawkland's Flag and What It Means

In Drawkland, patriotism is an admired and common trait. Of course, not everybody is the same. Some people simply think "I guess this is a good nation to be living in," and others think with full-blown nationalism. For the most part though, everybody holds at least a little pride in the nation they live in. It's not uncommon to see flags flown outside many houses and businesses, and the traditional black and red is a color scheme that can be found everywhere, from trash cans on the street to the logos of thousands of companies founded in Drawkland itself.

If there's anything Drawkians love, it's symbols to rally behind. The Drawkland flag, sometimes called "The Grand Pentad," is one of the most sacred things in Drawkland, behind perhaps the drawk itself. The flag itself has one of the most unique designs in the multiverse, both in format and color. When you see it, you know. Drawkland is here. Let's look at just what this flag means.

Nearly every color on any given nation's flag has powerful symbolism behind it. Ideals of freedom, purity, and resolve. Drawkland is no exception. Even with the rather unorthodox color scheme, there's still much meaning to it. Supposedly there's two interpretations of the colors, the more direct definition (one that is commonly associated with that color on other national flags), and the more mythical definition (one that is related to the mythos and history surrounding the formation of the nation). The mythological definition is more of a design concept than anything, and that'll be covered separately.

The Black is the dominant background color on the flag and the color most associated with Drawkland besides red. In most definitions, the black on the flag represents the nation as a whole, the land and the people that comprise it. It shows that behind everything that Drawkland prizes and accomplishes, there is and always will be the people of Drawkland behind it that truly make it happen. Without the people and the land that make Drawkland, there would be no real Drawkland. Just like how if you took away all the black parts of the flag, it would impossible for the "flag" to truly fly, there'd be nothing holding it together.
The Red is the secondary color of Drawkland. There's several different things the red means, but they're all equally valid in being a Drawkian. Really, the red stands for power, in many forms. It can take the form of strength, of bravery, overcoming struggles, or just red-blooded patriotism. The blue and gold represent more of what Drawkland achieves and prides itself on, and the red and black is what builds that success. You can visualize it on the flag, even - the black backdrop holds the red bands, which come together to hold up the blue-and-gold pentagon symbol in the center. The nation is just like that - the bravery and strength of the people and the land come together to create something greater.
The Blue is what comprises the pentagon in the center, breaking from the red/blue color scheme to accentuate itself. The blue represents valor and loyalty. If a nation does not have loyalty and pride among its citizens, then how great of a country can it really be? The pentagon itself is a reference to the 5 major territories and Drawkionels that make up the nation. While 7 may be the lucky number for Drawkians, 5 is the sacred one that the nation has held dear since its inception.
The Gold star in the center is the last component of the flag. Like in many other flags, the gold hue generally refers to the wealth and success of the nation. However, the Drawkian Star is also said to reference the longevity and eternal glory of the nation. Many nation flags have stars on them, some a great many, others only a few. However, Drawkland's lone star is a reference to the unity of the people. No matter where a Drawkian comes from, no matter what they do, they're still part of one unit. When you do what's right, you become part of the glory that has remained true for generations and will continue to reign for many more. This is what The Grand Pentad truly is.
Besides the color and the general Grand Pentad concept, there's also the more mythological meaning behind the flag. This dates back to when the nation was brought together and unified back thousands of years ago. Back when even Iarocav had not yet been born, the landmass that would one day be Drawkland was not the near-utopia it was now. In reality, it was a dark place, with people in settlements few and far between, and evil beings skulking about. This is what the black background represents here.
However, it wouldn't be that way forever. At some point, five leaders from five different areas of the continent rose to power in their own right. They broke out from the darkness and turned their lands into strongholds. Soon enough, they all found each other (thanks the most to Iarocav's exploration), and soon enough, they decided that 4 other powers at large was too many, and they turned against one another for supremacy. They built up their strength and spilled blood along the way, owing to the red color. The bands themselves roughly correspond to the geographical area of the continent where these leaders came to be.
After years of bloodshed, they came to realize that nobody could truly gain the upper hand. While none of these kingdoms were too alike, they all had their own strengths and weaknesses that played against each other. Nobody had the upper hand. Thus, they came together. The common mythos dictates that these 5 leaders met at a neutral location, the volcano called Valsum in the center of the continent. There they debated and lectured and argued at length, lasting many months. There, they decided upon peace and unity with each other, hence the blue. Supposedly they met in a secret chamber within the volcano, a sacred five-sided building that had inexplicably been there before any recorded time. This hasn't been historically confirmed, most historical account have them meeting at the summit within tents, but the rumor and mystical interpretation claims the chamber is real, and this is why the center of the flag is a pentagon. Historians, of course, just say this was a coincidental design choice.
After several decades of ruling the nation well, the leaders (now called Drawkionels) went on a quest, a long journey to obtain immortality. They just barely succeeded, and came back to the nation triumphantly. They've ruled the nation ever since, lasting thousands of years. The star, therefore, means eternity and glory. The single star refers to the fact that the same unit has governed the nation since the very beginning in solidarity.

Both of these meanings to the flag are equally valid. Many Drawkians are taught these concepts in school (generally at a middle school level where they're more easily able to comprehend the significance behind the historical and symbolism the flag represents). Many take these to heart, and live by this for their whole lives. It gives you a purpose, a drive. And that's what it's like to Be Drawkian.

The Interstellar Empire of Drawkland