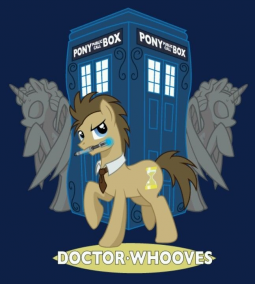 The Timey Wimey Adventurer of Dr Hooves is a colossal, efficient nation, ruled by Time Turner with an iron fist, and remarkable for its anti-smoking policies, compulsory military service, and ubiquitous missile silos. The hard-nosed, hard-working, cynical, humorless population of 6.666 billion Dr Hoovesians are ruled by a mostly-benevolent dictator, who grants the populace the freedom to live their own lives but watches carefully for anyone to slip up.

The medium-sized, corrupt, well-organized government juggles the competing demands of Administration, Industry, and Education. It meets to discuss matters of state in the capital city of Equestria. The average income tax rate is 64.6%, and even higher for the wealthy.

The frighteningly efficient Dr Hoovesian economy, worth a remarkable 1,731 trillion Hourglasses a year, is fairly diversified and mostly comprised of black market activity, especially in Gambling, Arms Manufacturing, Uranium Mining, and Information Technology. Average income is an amazing 259,797 Hourglasses, and evenly distributed, with the richest citizens earning only 2.8 times as much as the poorest.

Students consistently complain that the wi-fi ate their homework, the government has instituted 'traveller reservations' across the country, people have been circulating political cartoons of pigeons pooping on Time Turner, and conductors wield diamond-encrusted batons to fit in with their freshly gilded surroundings. Crime is pervasive, perhaps because of the country's complete lack of prisons. Dr Hooves's national animal is the Pony, which teeters on the brink of extinction due to widespread deforestation, and its national religion is Cards.

Dr Hooves is ranked 4,724th in the world and 3rd in Equestria for Most Efficient Economies, scoring 100.3 on the Krugman-Greenspan Business Outlook Index.