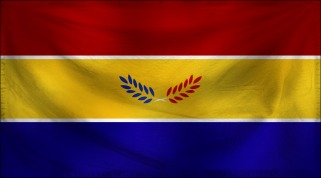 The Incorporated States of Dorl Gerch is a colossal, safe nation, ruled by Ronald Alderson with a fair hand, and remarkable for its barren, inhospitable landscape, compulsory military service, and irreverence towards religion. The hard-nosed, hard-working, democratic population of 6.051 billion Dorl Gerchians enjoy a sensible mix of personal and economic freedoms, while the political process is open and the people's right to vote held sacrosanct.

The relatively small, outspoken government prioritizes Defense, with Education, Healthcare, and Law & Order also on the agenda, while Spirituality and Environment receive no funds. It meets to discuss matters of state in the capital city of Jacoo DG. The average income tax rate is 9.6%, but much higher for the wealthy.

The strong Dorl Gerchian economy, worth 324 trillion Jacoos a year, is fairly diversified and led by the Arms Manufacturing industry, with major contributions from Basket Weaving, Book Publishing, and Gambling. Average income is 53,703 Jacoos, and evenly distributed, with the richest citizens earning only 2.6 times as much as the poorest.

Mr Happy's Funland has just been named Dorl Gerch's new capital, Ronald Alderson has just been declared ruler of Dorl Gerch in an international press conference, Church of Adonai has been named as Dorl Gerch's national religion, and lonely people are supposed to be cheered up by the many parties that they are never invited to. Crime, especially youth-related, is well under control. Dorl Gerch's national animal is the Roosnak, which teeters on the brink of extinction due to widespread deforestation, and its national religion is Church of Adonai.

Dorl Gerch is ranked 130,574th in the world and 18th in Emery for Most Valuable International Artwork, with zero Bank.

Most Recent Government Activity: 29 days ago