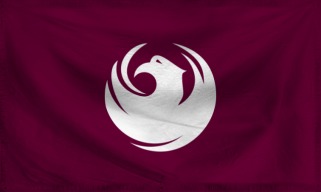 The Scavenger Empire of Dogetopian Yevika is a massive, cultured nation, ruled by Empress Sehkmet with an even hand, and renowned for its free-roaming dinosaurs, complete lack of prisons, and ban on automobiles. The hard-nosed, hard-working, democratic population of 4.026 billion Yevikans have some civil rights, but not too many, enjoy the freedom to spend their money however they like, to a point, and take part in free and open elections, although not too often.

The medium-sized government juggles the competing demands of Defense, Healthcare, and Welfare. It meets to discuss matters of state in the capital city of Yevikan Cairo. The average income tax rate is 27.2%.

The thriving Yevikan economy, worth 235 trillion Dingadangdongs a year, is fairly diversified and led by the Tourism industry, with significant contributions from Uranium Mining, Arms Manufacturing, and Gambling. Black market activity is notable. State-owned companies are common. Average income is 58,405 Dingadangdongs, and evenly distributed, with the richest citizens earning only 4.1 times as much as the poorest.

People regularly disappear off the streets and all evidence of them is destroyed, more than one company makes the board game Monopoly, the Ministry of Health has reported a sharp increase in the incidence of delayed menopause, and seven-year-olds debate for weeks on the merits of the Oxford comma. Crime, especially youth-related, is almost non-existent. Dogetopian Yevika's national animal is the Human, which frolics freely in the nation's many lush forests, and its national religion is Yevikism.

Dogetopian Yevika is ranked 57,825th in the world and 4th in Greater Nasunia for Most Influential, scoring 358 on the Soft Power Disbursement Rating.

State of Germany and