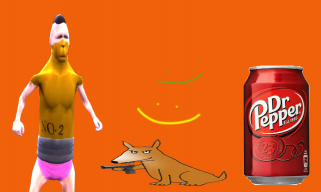 The Rogue Nation of Doctor Pepper Lads is a colossal, efficient nation, ruled by Bishop with an even hand, and notable for its fear of technology, public floggings, and keen interest in outer space. The hard-nosed, hard-working population of 5.464 billion Lads have some civil rights, but not too many, enjoy the freedom to spend their money however they like, to a point, and take part in free and open elections, although not too often.

The medium-sized government juggles the competing demands of Defense, Education, and Industry. It meets to discuss matters of state in the capital city of Peppertown. The average income tax rate is 30.1%, but much higher for the wealthy.

The powerhouse Lad economy, worth 545 trillion Peps a year, is broadly diversified and led by the Arms Manufacturing industry, with significant contributions from Uranium Mining, Beef-Based Agriculture, and Cheese Exports. Black market activity is extensive. State-owned companies are common. Average income is 99,879 Peps, and evenly distributed, with the richest citizens earning only 3.0 times as much as the poorest.

Muscular women are banned from competing in sporting competitions, the nation is famous for bravely sending wave after wave of its soldiers until the enemy runs out of bullets, Bishop has been known to threaten dissenting citizens with a machine gun at press conferences, and the government has declined to declare any particular religion as its 'official' one. Crime, especially youth-related, is almost non-existent. Doctor Pepper Lads's national animal is the Hound Rat, which frolics freely in the nation's many lush forests.

Doctor Pepper Lads is ranked 51,848th in the world and 1,059th in the Rejected Realms for Most Popular Tourist Destinations, with 1,062.54 Tourists Per Hour.