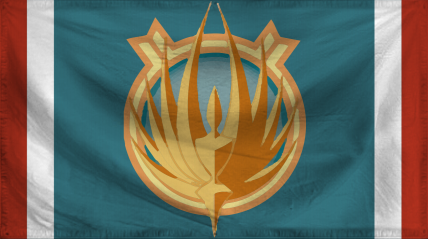 The The Isolationist Empire of Dimoniquid is a gargantuan, efficient nation, ruled by Emperor Ulrick with an iron fist, and remarkable for its avowedly heterosexual populace, frequent executions, and disturbing lack of elderly people. The hard-nosed, cynical, humorless, devout population of 20.181 billion Dimonicae are ruled without fear or favor by a psychotic dictator, who outlaws just about everything and refers to the populace as "my little playthings."

The large, corrupt, well-organized government prioritizes Defense, although Education, Industry, and Administration are also considered important, while Welfare and Social Policy receive no funds. It meets to discuss matters of state in the capital city of Verris Hive Citadel. The average income tax rate is 96.9%.

The frighteningly efficient Dimonici economy, worth a remarkable 7,702 trillion credits a year, is driven entirely by a combination of government and state-owned industry, with private enterprise illegal. However, for those in the know, there is an enormous, deeply entrenched black market in Information Technology, Arms Manufacturing, Uranium Mining, and Woodchip Exports. The private sector mostly consists of enterprising ten-year-olds selling lemonade on the sidewalk, but the government is looking at stamping this out. Average income is an amazing 381,695 credits, and evenly distributed, with the richest citizens earning only 2.0 times as much as the poorest.

Cinemas play art-house movies to ever-shrinking audiences as film critics rule the industry, visions of giant pink three horned spotted lions are a common side effect after Dimonicae eat their meals, the working classes live and die on the fields of the farming communes, and the military conducts 'training exercises' in prisons. Crime, especially youth-related, is totally unknown, thanks to a capable police force and progressive social policies in education and welfare. Dimoniquid's national animal is the three horned spotted lion, which is also the nation's favorite main course, and its national religion is Verris Unitology.

Dimoniquid is ranked 177,652nd in the world and 5,883rd in Lazarus for Greatest Rich-Poor Divides, with 1.95 Rich To Poor Income Ratio.