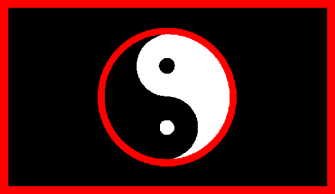 The Despotic Dictatorship of Despoticania is a gargantuan, cultured nation, ruled by The Despot with an iron fist, and renowned for its digital currency, irreverence towards religion, and stringent health and safety legislation. The hard-nosed, cynical, humorless population of 34.466 billion Despoticanians are ruled with an iron fist by the dictatorship government, which ensures that no-one outside the party gets too rich. In their personal lives, however, citizens are relatively unoppressed; it remains to be seen whether this is because the government genuinely cares about its people, or if it hasn't gotten around to stamping out civil rights yet.

The relatively small, corrupt, socially-minded, well-organized government juggles the competing demands of Education, Defense, and Industry. It meets to discuss matters of state in the capital city of Despoticania Prime. The income tax rate is 100%.

The frighteningly efficient Despoticanian economy, worth an astonishing 39,195 trillion Despollars a year, is driven entirely by a combination of government and state-owned industry, with private enterprise illegal. However, for those in the know, there is an enormous, deeply entrenched, broadly diversified black market in Information Technology, Arms Manufacturing, Retail, and Book Publishing. The private sector mostly consists of enterprising ten-year-olds selling lemonade on the sidewalk, but the government is looking at stamping this out. Average income is a breathtaking 1,137,211 Despollars, and distributed extremely evenly, with practically no difference between the richest and poorest citizens.

The number of judges has tripled in recent months, any body part that can be cut off a person is no longer considered to be their property, penny whistles have been rebranded 'tin hornpipes', and every workday begins with group therapy. Crime is totally unknown. Despoticania's national animal is the Winged Unicorn Pig, which teeters on the brink of extinction due to widespread deforestation, and its national religion is Church of Transcendental Hatred.

Despoticania is ranked 261,997th in the world and 121st in The Alliance of Dictators for Greatest Rich-Poor Divides, with 1.09 Rich To Poor Income Ratio.