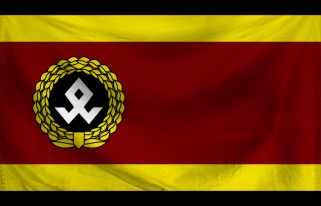 The State of Democratic Koyro is a gargantuan, cultured nation, ruled by Paramount Leader Ohanka Jon Bak-su with an iron fist, and renowned for its keen interest in outer space, strictly enforced bedtime, and sprawling nuclear power plants. The hard-nosed, cynical, humorless, devout population of 20.412 billion Koys are kept under strict control by the oppressive government, which measures its success by the nation's GDP and refers to individual citizens as "human resources."

The enormous, corrupt, moralistic, well-organized government juggles the competing demands of Defense, Law & Order, and Healthcare. It meets to discuss matters of state in the capital city of Ansyu. The average income tax rate is 98.6%.

The strong Democratic Koyroan economy, worth a remarkable 3,958 trillion Tokens a year, is driven entirely by a combination of government and state-owned industry, with private enterprise illegal. However, for those in the know, there is an enormous, deeply entrenched, highly specialized black market in Arms Manufacturing, Uranium Mining, Beef-Based Agriculture, and Woodchip Exports. The private sector mostly consists of enterprising ten-year-olds selling lemonade on the sidewalk, but the government is looking at stamping this out. Average income is an impressive 193,939 Tokens, and distributed extremely evenly, with little difference between the richest and poorest citizens.

Euthanasia is illegal, train stations can be 'armful places, builders across Democratic Koyro are blocked up with orders for new public loos, and the tomato-covered corpses that decorate the nation's cities are a favourite amongst morbid tourists. Crime, especially youth-related, is totally unknown, thanks to the all-pervasive police force and progressive social policies in education and welfare. Democratic Koyro's national animal is the Grass Snake, which frolics freely in the nation's many lush forests, and its national religion is Serpent Cult.