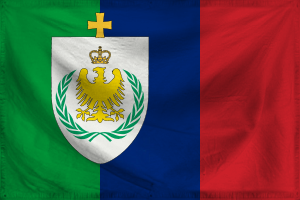 The United Provinces of Darkmania is a gargantuan, safe nation, ruled by Ädam Hüskam with an even hand, and remarkable for its museums and concert halls, rampant corporate plagiarism, and punitive income tax rates. The compassionate, democratic, devout population of 12.124 billion Darkmanians have some civil rights, but not too many, enjoy the freedom to spend their money however they like, to a point, and take part in free and open elections, although not too often.

The enormous government juggles the competing demands of Education, Industry, and Environment. It meets to discuss matters of state in the capital city of Örkendrem. The average income tax rate is 84.4%, and even higher for the wealthy.

The frighteningly efficient Darkmanian economy, worth a remarkable 1,419 trillion Darkmanian Danks a year, is quite specialized and led by the Tourism industry, with major contributions from Information Technology and Book Publishing. State-owned companies are common. Average income is an impressive 117,119 Darkmanian Danks, and distributed extremely evenly, with little difference between the richest and poorest citizens.

War vets look after war animals, coffee cups have grown in size to accommodate the huge ingredients list, environmental legislation occurs cyclically, and beating enemies to death with a baseball bat is legal if done within nine innings. Crime is totally unknown, thanks to a capable police force and progressive social policies in education and welfare. Darkmania's national animal is the Golden Eagle, which soars majestically through the nation's famously clear skies, and its national religion is Darkmanian Catholism.

Darkmania is ranked 201,333rd in the world and 22nd in Novapax for Greatest Rich-Poor Divides, with 1.58 Rich To Poor Income Ratio.