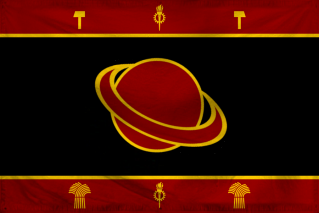 The Galactic Communes of Daravon is a colossal, environmentally stunning nation, ruled by Interim Chairwoman Switzerland with an even hand, and notable for its smutty television, digital currency, and punitive income tax rates. The hard-nosed, democratic, humorless population of 8.867 billion Daravonians enjoy extensive civil rights and enjoy a level of social equality free from the usual accompanying government corruption.

The enormous, corrupt, liberal government prioritizes Defense, with Education, Healthcare, and Administration also on the agenda, while Spirituality isn't funded at all. It meets to discuss matters of state in the capital city of Daravon. The average income tax rate is 98.2%.

The frighteningly efficient Daravonian economy, worth a remarkable 1,670 trillion Labors a year, is driven entirely by a combination of government and state-owned industry, with private enterprise illegal. The industrial sector, which is quite specialized, is led by the Information Technology industry, with significant contributions from Arms Manufacturing, Book Publishing, and Tourism. Average income is an impressive 188,434 Labors, and distributed extremely evenly, with practically no difference between the richest and poorest citizens.

When electric cars arrived nobody heard them coming, children's daycare starts at the crack of dawn, the carbon footprint falls along with the human footprint during war, and there's an aura of pseudoscience around academia. Crime, especially youth-related, is totally unknown, thanks to a capable police force and progressive social policies in education and welfare. Daravon's national animal is the Phoenix, which soars majestically through the nation's famously clear skies, and its national religion is Marxism-Francoism.

Daravon is ranked 220,476th in the world and 7,885th in The East Pacific for Most Conservative, scoring 22.25 on the Bush-Santorum Dawning Terror Index.