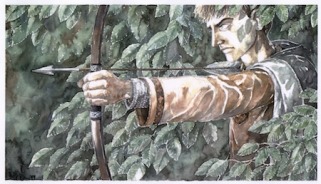 The Strongbow of Cuthalion is a gargantuan, socially progressive nation, notable for its barren, inhospitable landscape and spontaneously combusting cars. The hard-nosed, hard-working, democratic population of 13.066 billion Elves live in a state of perpetual fear, as a complete breakdown of social order has led to the rise of order through biker gangs.

The very strong Elf economy, worth 699 trillion IONS a year, is quite specialized and led by the Woodchip Exports industry, with major contributions from Soda Sales, Gambling, and Cheese Exports. Average income is 53,526 IONS, but there is a large disparity between incomes, with the richest 10% of citizens earning 223,808 per year while the poor average 8,344, a ratio of 26.8 to 1.

Scenic mountain valleys are flooded with water as damming projects get underway, graffiti graces every city's streets, teenagers across the country are celebrating the defeat of a national curfew bill, and Leader is the self-declared God of all Cuthalion. Crime, especially youth-related, is a problem, with the police force struggling against a lack of funding and a high mortality rate. Cuthalion's national animal is the hawk, which can occasionally be seen dodging aircraft in the nation's cities, and its national religion is Orioni.

Cuthalion is ranked 85,144th in the world and 51st in Middle Earth for Most Advanced Public Transport, scoring 904.47 on the Societal Mobility Rating.