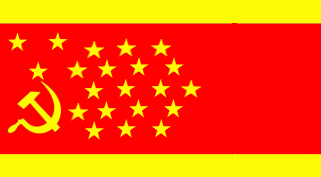 The United Socialist States of Crysuko is a gargantuan, safe nation, ruled by Distel Neos with an even hand, and remarkable for its smutty television, daily referendums, and compulsory military service. The hard-nosed population of 20.692 billion Crysukons enjoy extensive civil freedoms, particularly in social issues, while business tends to be more regulated.

The large government juggles the competing demands of Education, Healthcare, and Environment. It meets to discuss matters of state in the capital city of Crystin-Minokos. The average income tax rate is 95.5%.

The powerhouse Crysukon economy, worth a remarkable 2,344 trillion Cryzes a year, is driven almost entirely by government activity. The industrial sector is mostly comprised of enterprising ten-year-olds selling lemonade on the sidewalk, although the government is looking at stamping this out. Average income is an impressive 113,325 Cryzes, and distributed extremely evenly, with little difference between the richest and poorest citizens.

More than one company makes the board game Monopoly, the Intelligence services are renowned for their godless ways, the dessert 'Death by Chocolate' isn't the most lethal dish on the menu, and an opal a day keeps the negative thoughts at bay. Crime is totally unknown, thanks to a very well-funded police force and progressive social policies in education and welfare. Crysuko's national animal is the Domestic Cat, which frolics freely in the nation's many lush forests.

Crysuko is ranked 15,357th in the world and 2nd in The Almondrian Collective for Most Subsidized Industry, scoring 6,377.05 on the Gilded Widget Scale.