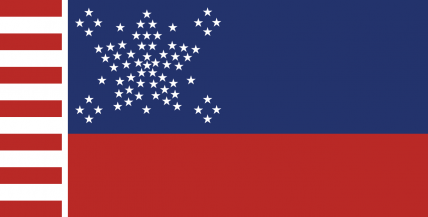 The Democratic States of Council of America is a massive, environmentally stunning nation, ruled by President Wiemold with an iron fist, and notable for its infamous sell-swords, keen interest in outer space, and free-roaming dinosaurs. The hard-nosed, cynical, humorless population of 3.08 billion Americans are kept under strict control by the oppressive government, which measures its success by the nation's GDP and refers to individual citizens as "human resources."

The large, corrupt, well-organized government juggles the competing demands of Defense, Law & Order, and Education. It meets to discuss matters of state in the capital city of Washington DC. The average income tax rate is 96.3%.

The frighteningly efficient American economy, worth 684 trillion Dollars a year, is driven entirely by a combination of government and state-owned industry, with private enterprise illegal. However, for those in the know, there is an enormous, deeply entrenched black market in Arms Manufacturing, Information Technology, Beef-Based Agriculture, and Trout Farming. The private sector mostly consists of enterprising ten-year-olds selling lemonade on the sidewalk, but the government is looking at stamping this out. Average income is an amazing 222,370 Dollars, and distributed extremely evenly, with little difference between the richest and poorest citizens.

Earthquake sirens are a leading cause of hearing loss, scientists spend more time enduring government inspections than they do on actual science, TV shows must meet strict ethnicity quotas, and arthritic citizens seem underrepresented at royal meet-and-greets. Crime, especially youth-related, is totally unknown, thanks to a very well-funded police force and progressive social policies in education and welfare. Council of America's national animal is the Eagle, which soars majestically through the nation's famously clear skies, and its national religion is Atheism.

Council of America is ranked 3,041st in the world and 65th in The Communist Bloc for Highest Poor Incomes, with 175,290.14 Standard Monetary Units.

The Communist regime of Sovietchina,