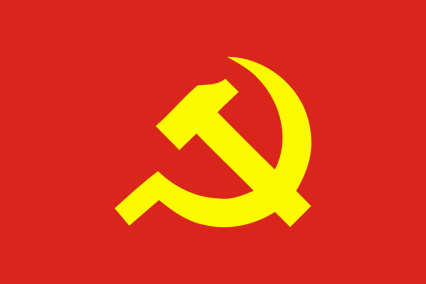 The Blue Sky of Communistica is a gargantuan, efficient nation, ruled by The Supreme Comrade with an iron fist, and renowned for its zero percent divorce rate, multi-spousal wedding ceremonies, and national health service. The hard-nosed, cynical, humorless population of 19.815 billion Communisticans are kept under strict control by the oppressive government, which measures its success by the nation's GDP and refers to individual citizens as "human resources."

The enormous, corrupt government juggles the competing demands of Law & Order, Defense, and Healthcare. It meets to discuss matters of state in the capital city of Moskva. The average income tax rate is 94.6%.

The all-consuming Communistican economy, worth a remarkable 2,380 trillion nones a year, is driven entirely by a combination of government and state-owned industry, with private enterprise illegal. The industrial sector, which is fairly diversified, is led by the Arms Manufacturing industry, with major contributions from Uranium Mining, Door-to-door Insurance Sales, and Basket Weaving. Average income is an impressive 120,133 nones, and evenly distributed, with the richest citizens earning only 4.5 times as much as the poorest.

Helping grandma with her Misgendering 101 homework is a national rite of passage, Communistican scientists are mixing chewing tobacco with bacon flavouring in an attempt to craft the perfect male snack, chest pains are considered part of the dining experience in Communistican restaurants, and lonely people are supposed to be cheered up by the many parties that they are never invited to. Crime, especially youth-related, is totally unknown, thanks to the all-pervasive police force and progressive social policies in education and welfare. Communistica's national animal is the all, which frolics freely in the nation's many lush forests, and its national religion is None.

Communistica is ranked 168,995th in the world and 129th in belgium for Rudest Citizens, with 36.79 Insults Per Minute.