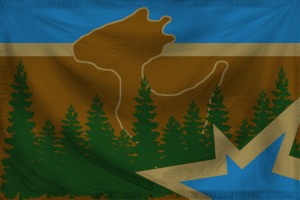 The Preserved Lands of Cocoabo Forest is a gargantuan, efficient nation, notable for its burgeoning Cocoabo population. The hard-working, democratic population of 11.143 billion Cocoabo Forestians enjoy frequent elections, which are uniformly corrupted by big-spending corporations buying politicians who best suit their interests.

The very strong Cocoabo Forestian economy, worth 417 trillion Tures a year, is broadly diversified and led by the Arms Manufacturing industry, with significant contributions from Trout Farming, Furniture Restoration, and Soda Sales. Average income is 37,438 Tures, but there is a significant disparity between incomes, with the richest 10% of citizens earning 114,366 per year while the poor average 9,499, a ratio of 12.0 to 1.

Crime is moderate, possibly because it is difficult to make it through a day without breaking one of the country's many regulations. Cocoabo Forest's national animal is the Cocoabo, which frolics freely in the nation's many lush forests.

Cocoabo Forest is ranked 154,132nd in the world and 45th in Anaia for Largest Publishing Industry, scoring 235.32 on the Bella Potter Productivity e-Index.