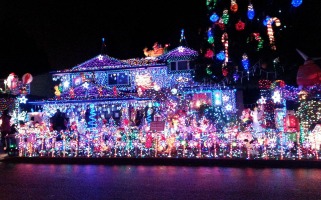 The Festivities of Christmas Eve is a gargantuan, efficient nation, ruled by Santa with an even hand, and renowned for its frequent executions, unlimited-speed roads, and keen interest in outer space. The compassionate, hard-working population of 14.552 billion Christmas Eveans have some civil rights, but not too many, enjoy the freedom to spend their money however they like, to a point, and take part in free and open elections, although not too often.

The medium-sized, corrupt government prioritizes Education, although Industry, Environment, and Healthcare are also considered important, while Spirituality receives no funds. It meets to discuss matters of state in the capital city of The North Pole. The average income tax rate is 98.4%.

The frighteningly efficient Christmas Evean economy, worth a remarkable 3,763 trillion presents a year, is led by the Tourism industry, with major contributions from Information Technology, Book Publishing, and Retail. Average income is an amazing 258,656 presents, but there is a significant disparity between incomes, with the richest 10% of citizens earning 744,795 per year while the poor average 71,348, a ratio of 10.4 to 1.

Couples kissing on the street are detained for 'unlawful exchange of genetic material', seafood restaurants assure customers 'If it lives in the sea, it's on our menu', 4-year-olds studying for their mathematics exams are anxious that they will be unemployable in adulthood if they fail, and RPG fans reminisce fondly about when people thought they were evil and dangerous rather than geeky and socially inept. Crime is totally unknown. Christmas Eve's national animal is the reindeer, which frolics freely in the nation's many lush forests, and its national religion is Christmas.

Christmas Eve is ranked 5,710th in the world and 5th in Christmas for Healthiest Citizens, with 18.77 bananas ingested per day.