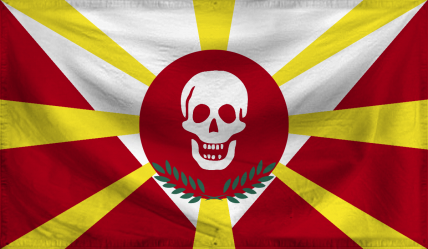 The Constitutional Monarchy of Chinohana is a massive, cultured nation, ruled by Chinohana Kage with a fair hand, and renowned for its rampant corporate plagiarism, irreverence towards religion, and devotion to social welfare. The compassionate, hard-working, democratic population of 2.012 billion Chinohanans hold their civil and political rights very dear, although the wealthy and those in business tend to be viewed with suspicion.

The medium-sized, liberal government juggles the competing demands of Industry, Education, and Environment. The average income tax rate is 52.0%, and even higher for the wealthy.

The frighteningly efficient Chinohanan economy, worth 191 trillion monarch's credits a year, is quite specialized and led by the Information Technology industry, with major contributions from Tourism, Retail, and Furniture Restoration. Average income is 95,299 monarch's credits, and distributed extremely evenly, with little difference between the richest and poorest citizens.

Citizens are permitted to carry concealed handguns, soylent products are an expensive commodity due to a lack of volunteers, the fishing lobby has stemmed the tide of environmental regulations, and primetime re-runs of The Black and White Minstrel Show are a critical hit. Crime, especially youth-related, is totally unknown. Chinohana's national animal is the kitsune, which frolics freely in the nation's many lush forests.

Chinohana is ranked 33,261st in the world and 144th in The Glorious Nations of Iwaku for Lowest Crime Rates, with 73.95 Law-abiding Acts Per Hour.

These United States of the Inner Planets,