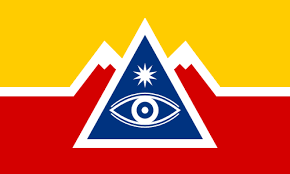 The Republic of Chavante is a gargantuan, efficient nation, ruled by Galvan with a fair hand, and remarkable for its deadly medical pandemics, keen interest in outer space, and absence of drug laws. The hard-nosed, hard-working, democratic, cheerful, devout population of 14.868 billion Chavanteans live in a state of perpetual fear, as a complete breakdown of social order has led to the rise of order through biker gangs.

The minute, corrupt, pro-business government, or what there is of one, is dominated by the Department of Administration, with Industry and Education also on the agenda, while Welfare and Defense aren't funded at all. It meets to discuss matters of state in the capital city of Chacarrama. Income tax is unheard of.

The frighteningly efficient Chavantean economy, worth a remarkable 5,258 trillion Medals a year, is driven almost entirely by the private sector, which is broadly diversified and led by the Retail industry, with major contributions from Gambling, Soda Sales, and Uranium Mining. Average income is an amazing 353,686 Medals, but there is an enormous disparity between incomes, with the richest 10% of citizens earning 1,965,251 per year while the poor average 31,908, a ratio of 61.6 to 1.

Citizens finish cleaning up after the annual National Treasure Hunt just in time for the next one, listless juries are assembled for the simplest of court cases, pretending to be prejudiced is a good way to get out of jury duty, and commuters and their desktops both bemoan their hard drives. Crime, especially youth-related, is so common that it is unusual to encounter someone following the law, perhaps because of the country's complete lack of prisons. Chavante's national animal is the Owl, which is also the nation's favorite main course, and its national religion is All religion.

Chavante is ranked 253,707th in the world and 1,839th in 10000 Islands for Most Beautiful Environments, with 1 pounds of wildlife per square mile.