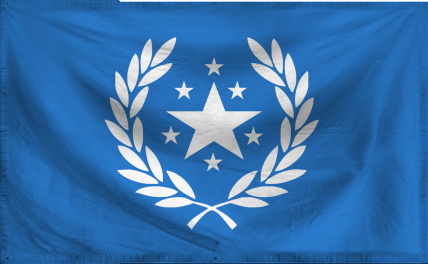 The Federal State of Central Nation is a gargantuan, genial nation, notable for its keen interest in outer space, prohibition of alcohol, and compulsory military service. The compassionate, cynical, cheerful, devout population of 41.09 billion Central Nation Citizens are ruled with an iron fist by the dictatorship government, which ensures that no-one outside the party gets too rich. In their personal lives, however, citizens are relatively unoppressed; it remains to be seen whether this is because the government genuinely cares about its people, or if it hasn't gotten around to stamping out civil rights yet.

It is difficult to tell where the omnipresent government stops and the rest of society begins, but it juggles the competing demands of Defense, Law & Order, and Education. It meets to discuss matters of state in the capital city of New Copenhagen. The average income tax rate is 98.3%.

The frighteningly efficient Central Nation Citizens economy, worth a remarkable 5,267 trillion Credits a year, is driven almost entirely by government activity. The industrial sector, which is extremely specialized, is mostly made up of the Arms Manufacturing industry, with major contributions from Uranium Mining. Average income is an impressive 128,196 Credits, and distributed extremely evenly, with practically no difference between the richest and poorest citizens.

Police officers have been re-kitted with designer uniforms and gold-plated handcuffs, future forecasters fearfully discuss grey goo and human obsolescence, selling your granddad's clothes requires an incredible amount of paperwork, and buses are widely regarded as the safest way to travel. Crime, especially youth-related, is totally unknown, thanks to the all-pervasive police force and progressive social policies in education and welfare. Central Nation's national animal is the Falcon, which soars majestically through the nation's famously clear skies, and its national religion is Messianic Judaism.

Central Nation is ranked 257,603rd in the world and 53rd in North America for Largest Pizza Delivery Sector, scoring -30.97 on the Pepperoni Propulsion Productivity Index.