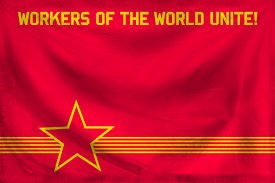 The People's Republic of Cedoria is a gargantuan, orderly nation, ruled by Chairwoman Mia Turner with an iron fist, and remarkable for its pith helmet sales, national health service, and punitive income tax rates. The compassionate, cynical, humorless population of 14.332 billion Cedorians are ruled with an iron fist by the dictatorship government, which ensures that no-one outside the party gets too rich. In their personal lives, however, citizens are relatively unoppressed; it remains to be seen whether this is because the government genuinely cares about its people, or if it hasn't gotten around to stamping out civil rights yet.

The large, corrupt, well-organized government juggles the competing demands of Education, Defense, and Industry. It meets to discuss matters of state in the capital city of Poras. The income tax rate is 100%.

The frighteningly efficient Cedorian economy, worth a remarkable 5,745 trillion Cedorian Dollars a year, is driven entirely by a combination of government and state-owned industry, with private enterprise illegal. The industrial sector, which is broadly diversified, is led by the Information Technology industry, with major contributions from Tourism, Arms Manufacturing, and Beef-Based Agriculture. Average income is an amazing 400,910 Cedorian Dollars, and distributed extremely evenly, with practically no difference between the richest and poorest citizens.

Citizens have to dodge their neighbors' drones while getting the morning paper, the country is at the forefront of a 'peacekeeping' mission to secure power plants in war-torn Maxtopia, high-income earners pay a 100% tax rate, and warfare increasingly resembles a video game. Crime, especially youth-related, is totally unknown, thanks to a well-funded police force and progressive social policies in education and welfare. Cedoria's national animal is the Giant Panda, which frolics freely in the nation's many lush forests, and its national religion is State Atheism.

Cedoria is ranked 983rd in the world and 4th in The Leftist Assembly for Most Influential, scoring 87,138 on the Soft Power Disbursement Rating.