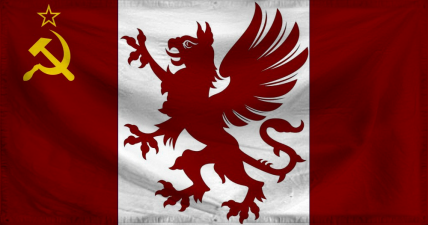 The Democratic Republic of Caymarnia is a gargantuan, environmentally stunning nation, ruled by President Madero with an even hand, and remarkable for its compulsory military service, free-roaming dinosaurs, and keen interest in outer space. The hard-nosed, humorless population of 14.107 billion Caymarnians are prohibited from doing almost everything except voting, which they do timidly and conservatively.

The enormous, corrupt government juggles the competing demands of Law & Order, Defense, and Education. It meets to discuss matters of state in the capital city of Caymarnigrad. The average income tax rate is 97.5%.

The frighteningly efficient Caymarnian economy, worth a remarkable 2,617 trillion people's marks a year, is driven entirely by a combination of government and state-owned industry, with private enterprise illegal. The industrial sector, which is fairly diversified, is dominated by the Arms Manufacturing industry, with significant contributions from Information Technology, Uranium Mining, and Beef-Based Agriculture. Average income is an impressive 185,532 people's marks, and distributed extremely evenly, with little difference between the richest and poorest citizens.

Caymarnians are regularly fired for looking at MyFace during their lunch breaks, street graffiti indicates the political party that dominates a neighborhood, invasive drug testing is now performed at elementary school sports days, and the government seeks peaceful forum with terrorists. Crime, especially youth-related, is totally unknown, thanks to the all-pervasive police force and progressive social policies in education and welfare. Caymarnia's national animal is the gryphon, which frolics freely in the nation's many lush forests.