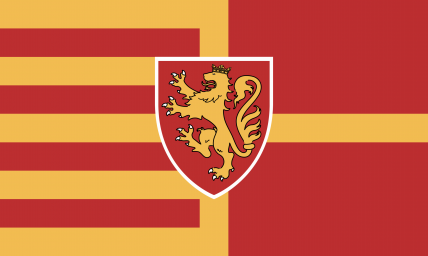 Government: Constitutional Monarchy
Head of State: Queen Isabella de Halloway
Master of Parliament: Don Gabriel de Barcelona
Currency: Euro
National Religion: Christianity (Catholicism)
Official Language: Cantelés
Recognized Minority Languages: Catalan, Occitan, English
Demonym: Cantelese or Cantelés
Capital: Cardona
GDP: $1.095 trillion
At a Glance
The Kingdom of Cantelo (Cantelés: Reín de Cantelo) is a country located in southwestern Europe straddling the Pyrenees, bordering Spain and France along the Mediterranean. With a total area of 68,839 square kilometers, Cantelo is the 17th largest country in the EU and the 24th largest country in Europe overall. By population (12.1 million) Cantelo is the 9th most populous member of the EU and 13th overall, with a population density of 229 people per square kilometer. Its GDP of $1.095 trillion makes Cantelo the 6th largest economy in the EU and the 7th largest economy in Europe.
Language
The official language, Cantelés, is an Occitano-Romance language spoken natively by approximately 65% of the population. A further 20% of Cantelese are native speakers of Catalan, with 15% speaking Occitan. Cantelés diverged from Catalan in the 13th century and became its own distinct language due to significant influence from the Middle English spoken by the Anglo-Catalan nobility. Cantelés was eventually adopted by Cantelese nobility as the official court language and supplanted both Occitan and Catalan. However, the English originally spoken (and its subsequent evolutions) survived as an aristocratic shibboleth until its extinction in the 18th century.
Ethnic Groups
Around 50% of the Cantelese population identifies as ethnically Cantelese. The Cantelese can trace the origins of their heritage to a melding of Catalan and English culture. A further 15% identify as 'Anglons,' descendants of 16th century English refugees escaping prosecution during the Protestant Reformation. The ancestors of the Anglons were attracted to Cantelo due to it being a Catholic country with an English aristocracy, and emigration from the British Isles was openly encouraged. The rest of the population identifies as Catalan or Occitan, and they compose around 35% of the population.
House of Halloway
The House of Halloway is an Anglo-Catalan dynasty founded by Sir Robert Halloway in 1150. The Halloway dynasty has existed for over 8 centuries, making it one of the oldest royal families in the world. Their rule has been almost constant, with a socialist revolution overthrowing King Piero III (and ending the Savoyard Era) in the early 20th century. The Cantelese Republic was short lived, and the monarchy regained control after a second civil war toppled the republican government. Today, the monarchy has the support of most Cantelese, however a sizeable minority support abolishing it and reestablishing a republic.

The foundation of Cantelo has its origins in the Second Crusade. English crusaders, led by Duke Robert Halloway, departed from England in 1145 with the intent of aiding the Christian military campaigns in the Levant. His company made stops in Iberia to join the Portuguese in combating the Almohads, eventually mounting regular raids against Muslim strongholds along the Atlantic and Mediterranean coasts of Iberia. The Count of Barcelona, Ramon Berenguer IV, saw Halloway and his men as an opportunity to further expand his realm southwards into Muslim lands. In 1144 Berenguer contracted Halloway to fight alongside Catalan knights against the Almohads, which had begun to raid border towns. Successfully helping the Catalans in pushing the Muslims further south, Halloway and his men were granted titles and holdings in Catalonia. However, Berenguer IV failed to provide adequate monetary compensation to pay for the mercenary services provided by Halloway and his men. After Berenguer IV died in 1149 with no children, Halloway was quick to seize the throne and claim it was to settle any remaining debt that the former Count had left unpaid before his death. This would be the beginning of the Halloway dynasty, which rules Cantelo to this day.

[Royal banner with the Coat of Arms of the Royal Family of Cantelo, Banara Kingal]

The Banara Kingal is the Coat of Arms of the House of Halloway on a red background.