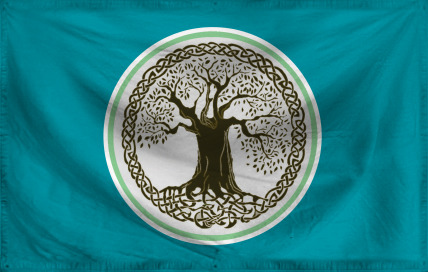 The Glitterarchy of Caer Sidi Founder is a colossal, socially progressive nation, ruled by Aynia and Carrot Moreaux with an iron fist, and renowned for its public floggings, compulsory military service, and devotion to social welfare. The compassionate, cynical, devout population of 9.812 billion Caer Sidians are ruled by a mostly-benevolent dictator, who grants the populace the freedom to live their own lives but watches carefully for anyone to slip up.

The medium-sized, well-organized government is primarily concerned with Welfare, although Education, Healthcare, and Spirituality are also considered important, while Industry isn't funded at all. It meets to discuss matters of state in the capital city of Bastion. The average income tax rate is 34.5%, but much higher for the wealthy.

The Caer Sidi Founderian economy, worth 350 trillion coins a year, is led by the Uranium Mining industry, with major contributions from Cheese Exports, Book Publishing, and Door-to-door Insurance Sales. State-owned companies are reasonably common. Average income is 35,716 coins, and evenly distributed, with the richest citizens earning only 2.7 times as much as the poorest.

Mothers are routinely abandoning their children in the name of women's rights, cricket farmers use magnifying glasses to fit every member of their herd with tiny tracking tags, suburban backyards are seized by the government and turned into national parks, and smoking is banned in public areas. Crime, especially youth-related, is totally unknown. Caer Sidi Founder's national animal is the kitten and its national religion is Carrayniaism.