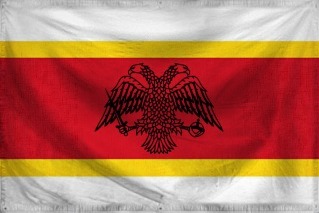 The Hellenic Republic of Byzanthia is a gargantuan, environmentally stunning nation, ruled by President Charles Burgardt with a fair hand, and renowned for its anti-smoking policies, keen interest in outer space, and stringent health and safety legislation. The compassionate, democratic population of 15.278 billion Byzanthians hold their civil and political rights very dear, although the wealthy and those in business tend to be viewed with suspicion.

The enormous, outspoken government juggles the competing demands of Environment, Education, and Healthcare. It meets to discuss matters of state in the capital city of Nafplio. The average income tax rate is 78.1%, and even higher for the wealthy.

The large but inefficient Byzanthian economy, worth 667 trillion euros a year, is quite specialized and mostly made up of the Book Publishing industry, with significant contributions from Furniture Restoration, Tourism, and Basket Weaving. State-owned companies are common. Average income is 43,712 euros, and evenly distributed, with the richest citizens earning only 2.4 times as much as the poorest.

Enemy navies sail within bombardment range of major coastal cities with impunity, excited shovel-bearing geeks wander the countryside, old dogs don't have to learn new tricks but they have to prove they haven't forgotten old ones, and it takes months to get the proper permits for a child's first tricycle. Crime is totally unknown, thanks to a well-funded police force and progressive social policies in education and welfare. Byzanthia's national animal is the phoenix, which soars majestically through the nation's famously clear skies, and its national religion is Greek Orthodoxy.

Byzanthia is ranked 187,155th in the world and 2nd in The United Coalition of Nation States for Highest Wealthy Incomes, with 65,373 Standard Monetary Units.