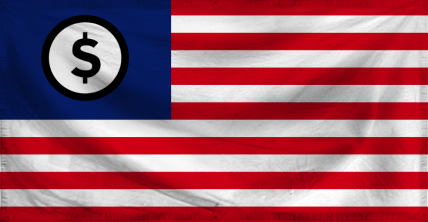 The Commonwealth of Business States of America is a massive, efficient nation, ruled by the Free Market with a fair hand, and remarkable for its deadly medical pandemics, smutty television, and complete absence of social welfare. The hard-nosed, hard-working, democratic, humorless population of 3.354 billion Business Statians are effectively ruled by a group of massive corporations, who run for political office and provide their well-off citizens with world-class goods and services. Their poorer citizens, however, are mostly starving to death while being urged to go out and get real jobs. The populace has reasonably extensive civil rights, although these are mostly aimed at allowing them to buy whatever they like.

The tiny, corrupt, pro-business government prioritizes Industry, with Defense, Law & Order, and Education also on the agenda, while Environment and Welfare are ignored. It meets to discuss matters of state in the capital city of Wall Street. Citizens pay a flat income tax of 1.4%.

The frighteningly efficient Business Statian of America economy, worth 839 trillion dollars a year, is driven almost entirely by the private sector, which is broadly diversified and led by the Retail industry, with significant contributions from Information Technology, Arms Manufacturing, and Soda Sales. Average income is an amazing 250,415 dollars, but there is a significant disparity between incomes, with the richest 10% of citizens earning 714,913 per year while the poor average 69,905, a ratio of 10.2 to 1.

Proper policy proposals prerequire professional peer-reviewed papers, citizens are enjoying a recent large cut in taxes, frightened witnesses and seriously ill jurors wear the same handcuffs as the defendant, and the prevalence of circular logic frequently renders parliamentary observers dizzy. Crime, especially youth-related, is a problem, perhaps because of the country's complete lack of prisons. Business States of America's national animal is the eagle, which is also the nation's favorite main course.

Business States of America is ranked 260,418th in the world and 7,202nd in Lazarus for Healthiest Citizens, with 0.35 bananas ingested per day.