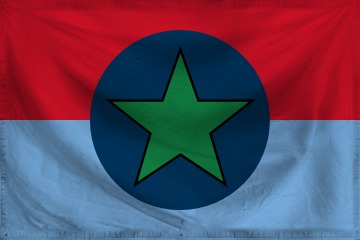 The Federation of Burakis is a colossal, genial nation, ruled by Morias Gordon with a fair hand, and remarkable for its otherworldly petting zoo, pith helmet sales, and punitive income tax rates. The compassionate, democratic population of 6.035 billion Burakisians are fiercely patriotic and enjoy great social equality; they tend to view other, more capitalist countries as somewhat immoral and corrupt.

The large government juggles the competing demands of Education, Healthcare, and Administration. It meets to discuss matters of state in the capital city of Wondersin. The average income tax rate is 90.8%, and even higher for the wealthy.

The frighteningly efficient Burakisian economy, worth 746 trillion Bortars a year, is driven entirely by a combination of government and state-owned industry, with private enterprise illegal. The industrial sector, which is quite specialized, is mostly made up of the Information Technology industry, with significant contributions from Tourism and Retail. Average income is an impressive 123,615 Bortars, and distributed extremely evenly, with little difference between the richest and poorest citizens.

The nation is committed to nuclear rearmament, earthquake sirens are a leading cause of hearing loss, guide dogs for the blind have been seen using government websites, and the amount welfare recipients spend on fertilizer has exploded. Crime, especially youth-related, is totally unknown, thanks to a capable police force and progressive social policies in education and welfare. Burakis's national animal is the Burakis feral hawk, which soars majestically through the nation's famously clear skies.

Burakis is ranked 25,208th in the world and 163rd in the West Pacific for Highest Drug Use, scoring 112.8 on the Pineapple Fondness Rating.