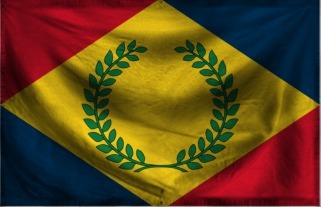 The Democratic Republic of Brros is a colossal, safe nation, renowned for its museums and concert halls, pith helmet sales, and devotion to social welfare. The compassionate, democratic, devout population of 6.695 billion Brrosians have some civil rights, but not too many, enjoy the freedom to spend their money however they like, to a point, and take part in free and open elections, although not too often.

The medium-sized government juggles the competing demands of Administration, Education, and Welfare. It meets to discuss matters of state in the capital city of Aaris. The average income tax rate is 58.6%, and even higher for the wealthy.

The all-consuming Brrosian economy, worth 732 trillion Chrins a year, is broadly diversified and led by the Information Technology industry, with significant contributions from Tourism, Trout Farming, and Book Publishing. State-owned companies are common. Average income is an impressive 109,460 Chrins, and evenly distributed, with the richest citizens earning only 2.1 times as much as the poorest.

Agreeing to appear on TV is often the best way to access social care, the nation has nearly as many history museums as Brrosians, lobotomised jaywalkers can barely ambulate let alone repeat their offences, and doctors spend more time writing sick notes than caring for the sick. Crime, especially youth-related, is totally unknown, thanks to a capable police force and progressive social policies in education and welfare. Brros's national animal is the bobcat, which is also the nation's favorite main course.

Brros is ranked 96,584th in the world and 4,290th in the South Pacific for Largest Automobile Manufacturing Sector, scoring 2,223.88 on the Henry Ford Productivity Index.