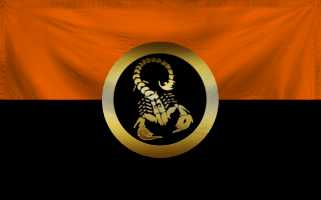 The Almighty Empire of Broughdom is a gargantuan, orderly nation, ruled by The Broughmeister with an iron fist, and renowned for its multi-spousal wedding ceremonies, public floggings, and complete absence of social welfare. The hard-nosed, hard-working, cynical, cheerful population of 37.518 billion Broughdomians enjoy great individual freedoms in everything except elections, which, where they exist at all, are populist shams for a dictatorship government that has no intention of ever giving up power.

The relatively small, liberal, pro-business government prioritizes Education, with Environment and Defense also on the agenda, while Spirituality and Welfare are ignored. It meets to discuss matters of state in the capital city of Scorpia. Citizens pay a flat income tax of 8.6%.

The frighteningly efficient Broughdomian economy, worth a remarkable 3,374 trillion I O US a year, is highly specialized and led by the Gambling industry, with major contributions from Information Technology, Arms Manufacturing, and Book Publishing. Average income is 89,933 I O US, but there is a significant disparity between incomes, with the richest 10% of citizens earning 271,933 per year while the poor average 23,154, a ratio of 11.7 to 1.

Political activists are routinely executed, mining is the nation's most dangerous occupation, senior citizens can usually be found doing heavy manual labour, and the government is reining in public spending. Crime, especially youth-related, is pervasive, probably because of the absence of a police force. Broughdom's national animal is the Golden Scorpion, which is also the nation's favorite main course, and its national religion is quite frankly pathetic.

Broughdom is ranked 205,170th in the world and 6th in The Worlds Stronghold for Largest Trout Fishing Sector, scoring -12.52 on the Nemo Depletion Efficiency Index.