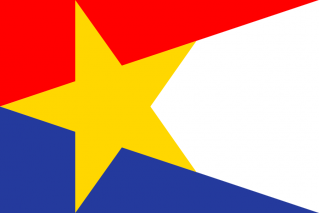 After the highly functional (but extremely unpopular) One-World-Government (OWG) collapsed in 2050, society and civilization seemingly went down with it. However, many small communities started to form organizational structures that strongly resembled a government.

The area surrounding the town of Bodegraven, which is in what used to be called the Netherlands, was an area where anarcho-communists started working together. In 2052, the community had grown as other areas joined this well functioning community. However, more people also means more problems. With the knowledge that this community was too large to work in a anarchistic or communist way, a government formed, which, after a democratic vote, embraced democracy. However, to create something that unified the country and the people could rally behind in times of struggle, they created the post of King, a non-partisan, non-political office, in the style of the parliamentary monarchies of Western Europe in the late 20th and early 21st century.

The formation of said government is seen as the point where Bodegraven could realistically claim to be a country. The rest of the 2050's were a period of rapid growth for Bodegraven. Many surrounding communities thought it to be better to join an existing nation instead of forming one of their own, and soon the nation comprised roughly the area that used to be governed by the Netherlands. As news spread slowly to the other communities in Western Europe, areas in Belgium and Luxembourg also joined the young country. Some overseas areas, most notably East Anglia, New England and Greenland also joined, as have other small areas all over the world.

Bodegraven is a part of the Global Right Alliance (GRA), a conglomerate of nations promoting justice all over the world. Within the GRA, Bodegraven has held both the functions of Speaker of the House and the position of Foreign Affairs Minister for short periods of time. However, the delegacy to the World Assembly (a rough replica of the UN) is still in hands of the Bodegraven, where the nation's appointed delegates have fought for the interests and values of Bodegraven and the GRA.

The Not So Holy Red Blue Utopias of Bodegraven