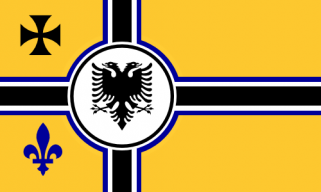 The Empire of Bingellia is a gargantuan, efficient nation, ruled by Kaiser von Hohenfriedberg with an even hand, and notable for its national health service, frequent executions, and ubiquitous missile silos. The hard-nosed, cynical, humorless population of 12.697 billion Bingellians are fiercely patriotic and enjoy great social equality; they tend to view other, more capitalist countries as somewhat immoral and corrupt.

The enormous, corrupt government juggles the competing demands of Defense, Education, and Law & Order. It meets to discuss matters of state in the capital city of Eisenhall. The average income tax rate is 98.1%.

The frighteningly efficient Bingellian economy, worth a remarkable 2,186 trillion Doshes a year, is quite specialized and led by the Tourism industry, with significant contributions from Arms Manufacturing, Information Technology, and Book Publishing. State-owned companies are common. Average income is an impressive 172,238 Doshes, and distributed extremely evenly, with little difference between the richest and poorest citizens.

Visiting dignitaries make excuses to leave functions early and head to the nearest pub, many suspect the government "doth protest too much" with their curiously specific denials of conspiracy theories, roads are often attended by round-the-clock construction crews, and posing for pictures is an integral part of military training. Crime, especially youth-related, is totally unknown, thanks to a very well-funded police force and progressive social policies in education and welfare. Bingellia's national animal is the Penguin, which frolics freely in the nation's sparkling oceans, and its national religion is Wobberianism.

Bingellia is ranked 208,471st in the world and 1st in The Nuggets for Largest Soda Pop Sector, scoring -11.22 on the Addison-Fukk Productivity Rating.