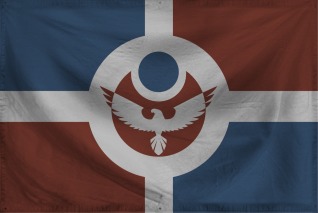 The Kingdom of Beiarusia is a gargantuan, genial nation, ruled by King Gyles Landvik with an even hand, and renowned for its ubiquitous missile silos, frequent executions, and punitive income tax rates. The compassionate, democratic, cheerful population of 14.839 billion Beiarusians have some civil rights, but not too many, enjoy the freedom to spend their money however they like, to a point, and take part in free and open elections, although not too often.

The enormous government juggles the competing demands of Education, Healthcare, and Environment. It meets to discuss matters of state in the capital city of Thames. The average income tax rate is 91.9%, and even higher for the wealthy.

The frighteningly efficient Beiarusian economy, worth a remarkable 1,695 trillion Dollars a year, is quite specialized and led by the Book Publishing industry, with significant contributions from Tourism, Information Technology, and Furniture Restoration. State-owned companies are common. Average income is an impressive 114,286 Dollars, and distributed extremely evenly, with little difference between the richest and poorest citizens.

The nation's politicians are acknowledged as the most polite in the region to the dismay of comedians everywhere, nuclear physics is the most popular course at university, space research funding has hit a recent high while several military bases are being closed down, and it turns out that money can buy you happiness. Crime is totally unknown, thanks to a very well-funded police force and progressive social policies in education and welfare. Beiarusia's national animal is the Falcon, which soars majestically through the nation's famously clear skies, and its national religion is Eastern Orthodox.

Beiarusia is ranked 160,386th in the world and 10th in Korovia for Most Authoritarian, with 492.33 milliStalins.

Most Recent Government Activity: 8 minutes ago