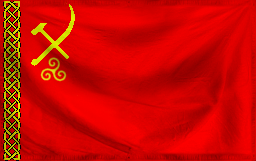 The Gymanwlad Sosialaidd of Beddgelert is a gargantuan, cultured nation, ruled by the Soveriegn Body of the Populace with an even hand, and renowned for its museums and concert halls, keen interest in outer space, and complete lack of prisons. The hard-nosed, cheerful population of 38.928 billion Beddgelens are fiercely patriotic and enjoy great social equality; they tend to view other, more capitalist countries as somewhat immoral and corrupt.

The large, socially-minded government juggles the competing demands of Defense, Welfare, and Education. It meets to discuss matters of state in the capital city of Acinc. The average income tax rate is 96.2%.

The frighteningly efficient Beddgelen economy, worth a remarkable 8,921 trillion gwarthegions a year, is driven entirely by a combination of government and state-owned industry, with private enterprise illegal. However, for those in the know, there is a large, well-organized, highly specialized black market in Book Publishing, Arms Manufacturing, Information Technology, and Automobile Manufacturing. The private sector mostly consists of enterprising ten-year-olds selling lemonade on the sidewalk, but the government is looking at stamping this out. Average income is an amazing 229,177 gwarthegions, and distributed extremely evenly, with practically no difference between the richest and poorest citizens.

Exorbitant spending on icebreakers breaks the ice at every budget meeting, the military maintains a fierce arsenal of 'Cure Missiles', in life full of care there is no time to stop and stare, and The Soveriegn Body of the Populace's media campaigns take a hiatus around exam week. Crime, especially youth-related, is all-pervasive, perhaps because of the country's complete lack of prisons. Beddgelert's national animal is the baedd gwyllt, which is also the nation's favorite main course, and its national religion is Geletian Druidism.

Beddgelert is ranked 8,984th in the world and 3rd in A Modern World for Most Secular, with 95.62 Atheism Rate.