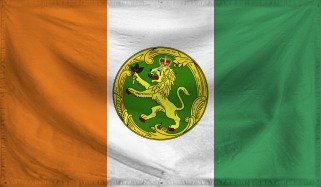 The Kingdom of Banija is a gargantuan, efficient nation, ruled by Kabaka Mwanga with an even hand, and remarkable for its infamous sell-swords, public floggings, and complete lack of prisons. The hard-nosed, hard-working, devout population of 14.344 billion Banijans are either ruled by a sleek, efficient government or a conglomerate of multinational corporations; it's difficult to tell which.

The large, corrupt government juggles the competing demands of Healthcare, Education, and Defense. It meets to discuss matters of state in the capital city of Busukuma. Citizens pay a flat income tax of 68.5%.

The frighteningly efficient Banijan economy, worth a remarkable 1,369 trillion Shillings a year, is quite specialized and mostly made up of the Tourism industry, with significant contributions from Arms Manufacturing. Black market activity is extensive. Average income is 95,473 Shillings, but there is a significant disparity between incomes, with the richest 10% of citizens earning 351,587 per year while the poor average 18,313, a ratio of 19.2 to 1.

A lack of funding for new shows has turned television into 24/7 re-runs, children who can't memorize their multiplication tables are sent to the mines, the volume of paperwork used to complete a single environmental assessment defeats the purpose, and forest fires have dropped dramatically as there are hardly any forests left. Crime, especially youth-related, is totally unknown. Banija's national animal is the African Lion, which is also the nation's favorite main course, and its national religion is Puritan Church of Latter-Day Saints.

Banija is ranked 238,045th in the world and 176th in Atlantian Oceania for Most Income Equality, scoring 5.21 on the Marx-Engels Emancipation Scale.

Most Recent Government Activity: 16 minutes ago