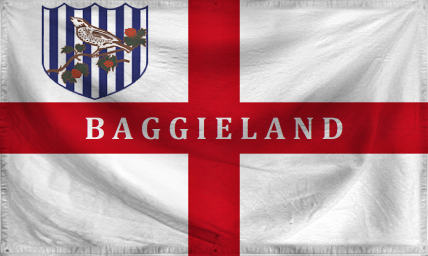 The Imperial Glorious Empire of Baggieland is a gargantuan, cultured nation, ruled by King Alswitch with an iron fist, and remarkable for its rum-swilling pirates, ban on automobiles, and avowedly heterosexual populace. The hard-nosed, hard-working, cynical, humorless population of 10.807 billion Baggies are ruled with an iron fist by the corrupt, dictatorship government, which oppresses anyone who isn't on the board of a Fortune 500 company. Large corporations tend to be above the law, and use their financial clout to gain ever-increasing government benefits at the expense of the poor and unemployed.

The relatively small, corrupt, pro-business, well-organized government juggles the competing demands of Education, Industry, and Environment. It meets to discuss matters of state in the capital city of Hawthorn. Citizens pay a flat income tax of 3.3%.

The frighteningly efficient Baggielandian economy, worth a remarkable 3,103 trillion boings a year, is fairly diversified and led by the Tourism industry, with significant contributions from Retail, Beef-Based Agriculture, and Gambling. Black market activity is frequent. Average income is an amazing 287,172 boings, but there is a large disparity between incomes, with the richest 10% of citizens earning 1,166,709 per year while the poor average 46,988, a ratio of 24.8 to 1.

Disadvantaged youths often commit felonies to enhance their educational prospects, libraries are refusing to stock A Midsummer Night's Dream because it has an ass in it, sharks are enjoying their deliveries of canned food, and kids are taught in schools to argue with their parents. Crime, especially youth-related, is totally unknown, despite the fact that it is difficult to make it through a day without breaking one of the country's many laws. Baggieland's national animal is the throstle, which frolics freely in the nation's many lush forests.