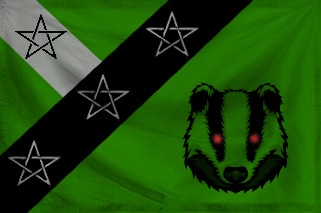 The Empire of Badger Wind is a gargantuan, environmentally stunning nation, ruled by Creator Destroyer with an iron fist, and renowned for its compulsory military service, otherworldly petting zoo, and irreverence towards religion. The hard-nosed, cynical, humorless population of 19.426 billion Badgers are ruled with an iron fist by the dictatorship government, which ensures that no-one outside the party gets too rich. In their personal lives, however, citizens are relatively unoppressed; it remains to be seen whether this is because the government genuinely cares about its people, or if it hasn't gotten around to stamping out civil rights yet.

The enormous, corrupt, socially-minded, well-organized government juggles the competing demands of Environment, Education, and Healthcare. It meets to discuss matters of state in the capital city of When Pigs Fly. The income tax rate is 100%.

The frighteningly efficient Badgerian economy, worth a remarkable 5,758 trillion nuggets a year, is driven entirely by a combination of government and state-owned industry, with private enterprise illegal. However, for those in the know, there is an enormous, deeply entrenched, highly specialized black market in Tourism, Information Technology, and Cheese Exports. The private sector mostly consists of enterprising ten-year-olds selling lemonade on the sidewalk, but the government is looking at stamping this out. Average income is an amazing 296,440 nuggets, and distributed extremely evenly, with little difference between the richest and poorest citizens.

Explosive diarrhoea is not just a colorful phrase, knitters are arrested for carrying needles in their bags, tax evaders are regularly visited by agents of the Badger Wind Blood Tithe, and all writing must pass a censorship board before being allowed on the shelves. Crime, especially youth-related, is totally unknown, thanks to a capable police force and progressive social policies in education and welfare. Badger Wind's national animal is the Badger, which frolics freely in the nation's many lush forests.

Badger Wind is ranked 214,324th in the world and 6,670th in the South Pacific for Largest Insurance Industry, scoring -40.9 on the Risk Expulsion Effectiveness Rating.