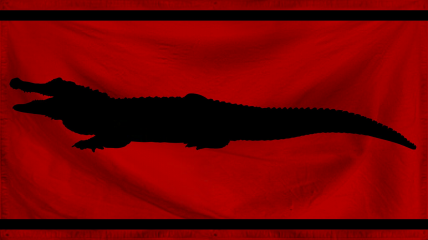 The Kingdom of Azersindabst is a massive, efficient nation, notable for its disturbing lack of elderly people, avowedly heterosexual populace, and complete absence of social welfare. The hard-nosed, cynical, humorless population of 1.766 billion Azersindabstians are kept under strict control by the oppressive government, which measures its success by the nation's GDP and refers to individual citizens as "human resources."

The medium-sized, corrupt, moralistic, well-organized government prioritizes Defense, although Education, Industry, and Administration are also considered important, while Welfare and International Aid aren't funded at all. It meets to discuss matters of state in the capital city of Axis Mundi. The average income tax rate is 67.5%.

The frighteningly efficient Azersindabstian economy, worth 299 trillion Levs a year, is driven entirely by a combination of government and state-owned industry, with private enterprise illegal. However, for those in the know, there is an enormous, deeply entrenched, quite specialized black market in Information Technology, Arms Manufacturing, Trout Farming, and Automobile Manufacturing. The private sector mostly consists of enterprising ten-year-olds selling lemonade on the sidewalk, but the government is looking at stamping this out. Average income is an impressive 169,742 Levs, and evenly distributed, with the richest citizens earning only 3.4 times as much as the poorest.

The incidence of wrist sprains is falling, fashion magazine covers finally display realistic body images following photo-manipulation becoming illegal, a rusted hulk in Axis Mundi harbour has been voted the worst eyesore in Declansburg, and the army's use of chemical weapons leaves a bad taste in the mouth. Crime, especially youth-related, is totally unknown, despite the fact that it is difficult to make it through a day without breaking one of the country's many laws. Azersindabst's national animal is the Chug, which frolics freely in the nation's many lush forests.

Azersindabst is ranked 22,896th in the world and 73rd in Declansburg for Smartest Citizens, with 57.61 quips per hour.