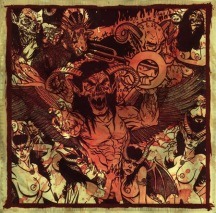 The Hippie slaying states of Axorian is a colossal, orderly nation, ruled by Sam Ramsdonck with an iron fist, and renowned for its ubiquitous missile silos, compulsory military service, and devotion to social welfare. The hard-nosed, cynical, humorless population of 9.9 billion Axorianians are ruled with an iron fist by the dictatorship government, which ensures that no-one outside the party gets too rich. In their personal lives, however, citizens are relatively unoppressed; it remains to be seen whether this is because the government genuinely cares about its people, or if it hasn't gotten around to stamping out civil rights yet.

The large, corrupt, well-organized government prioritizes Defense, with Education, Administration, and Environment also on the agenda, while Spirituality isn't funded at all. It meets to discuss matters of state in the capital city of Antverpia corruptus. The income tax rate is 100%.

The frighteningly efficient Axorianian economy, worth a remarkable 4,869 trillion breakcore samples a year, is driven entirely by a combination of government and state-owned industry, with private enterprise illegal. However, for those in the know, there is an enormous, deeply entrenched, quite specialized black market in Information Technology, Arms Manufacturing, and Tourism. The private sector mostly consists of enterprising ten-year-olds selling lemonade on the sidewalk, but the government is looking at stamping this out. Average income is an amazing 491,906 breakcore samples, and distributed extremely evenly, with little difference between the richest and poorest citizens.

Penny whistles have been rebranded 'tin hornpipes', cremation is compulsory for the deceased, the native owl population is in permanent hibernation, and kids' party bags often contain candy and e-cigarettes. Crime, especially youth-related, is totally unknown. Axorian's national animal is the Bart de bever, which frolics freely in the nation's many lush forests.

Axorian is ranked 212,177th in the world and 172nd in belgium for Largest Automobile Manufacturing Sector, scoring -21.35 on the Henry Ford Productivity Index.