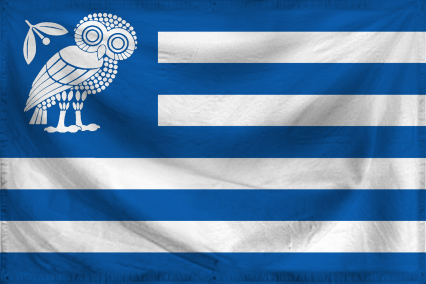 The Intellectual Empire of Awesomepotomia is a gargantuan, socially progressive nation, ruled by Prime Minister Extraordinaire with an even hand, and renowned for its rampant corporate plagiarism, unlimited-speed roads, and restrictive gun laws. The compassionate, hard-working, cheerful population of 19.604 billion Awesomepotomiens enjoy extensive civil freedoms, particularly in social issues, while business tends to be more regulated.

The relatively small, corrupt government prioritizes Education, although Environment, Healthcare, and Industry are also considered important, while Spirituality and Defense aren't funded at all. It meets to discuss matters of state in the capital city of Mont Blanc. The average income tax rate is 86.6%, and even higher for the wealthy.

The frighteningly efficient Awesomepotomian economy, worth a remarkable 7,762 trillion Phantom Owl Dubloons a year, is quite specialized and led by the Information Technology industry, with major contributions from Tourism, Book Publishing, and Retail. Average income is an amazing 395,945 Phantom Owl Dubloons, and distributed extremely evenly, with little difference between the richest and poorest citizens.

Annulments are on the rise as couples discover their ancestors were born in the same hospitals, a death threat has replaced 'hello' as an official greeting in the nation, saying "don't do anything that Prime Minister Extraordinaire wouldn't do" doesn't exclude a great deal, and citizens buy season tickets on a 20-year payment plan. Crime is totally unknown. Awesomepotomia's national animal is the Awesomepotomian Red Panda, which frolics freely in the nation's many lush forests, and its national religion is The Order of the Snow Leopard.

Awesomepotomia is ranked 885th in the world and 6th in Europeia for Highest Economic Output, with 7,762 trillion Standard Monetary Units.