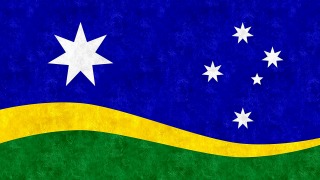 The Fooᴅ BıoScıєɴтısтs of Auztraalia is a gargantuan, genial nation, ruled by Julia Gillard with an even hand, and renowned for its rum-swilling pirates, complete lack of prisons, and digital currency. The compassionate, democratic population of 11.703 billion Auztraalians have some civil rights, but not too many, enjoy the freedom to spend their money however they like, to a point, and take part in free and open elections, although not too often.

The relatively small government prioritizes Education, with Environment, Healthcare, and Industry also on the agenda, while Spirituality and Defense are ignored. It meets to discuss matters of state in the capital city of Canberra. The average income tax rate is 23.0%, but much higher for the wealthy.

The all-consuming Auztraalian economy, worth a remarkable 1,512 trillion AUZ Dollars a year, is broadly diversified and led by the Information Technology industry, with major contributions from Tourism, Book Publishing, and Beef-Based Agriculture. State-owned companies are common. Average income is an impressive 129,228 AUZ Dollars, and evenly distributed, with the richest citizens earning only 2.1 times as much as the poorest.

Halberds are common 18th birthday presents, autopsies often involve only cursory examination, fixing attendance at women's matches is a matter of "when they go low, we go high... funding", and many friends and relatives of Julia Gillard have been given ambassador jobs in tropical island nations. Crime is totally unknown. Auztraalia's national animal is the Kangaroo, which frolics freely in the nation's many lush forests.

Auztraalia is ranked 16,515th in the world and 11th in Zombie Research Institute for Smartest Citizens, with 70.08 quips per hour.