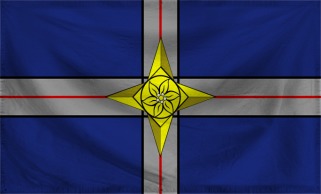 The Consitutional Diarchy of Argorinthia is a gargantuan, efficient nation, ruled by Queen Elodie de Devereaux-Avignon with a fair hand, and remarkable for its museums and concert halls, sprawling nuclear power plants, and otherworldly petting zoo. The compassionate, democratic, cheerful, devout population of 11.37 billion Argorinthians are free to do what they want with their own bodies, and vote for whomever they like in elections; if they go into business, however, they are regulated to within an inch of their lives.

The enormous, outspoken government prioritizes Education, although Healthcare, Environment, and Administration are also considered important. It meets to discuss matters of state in the capital city of High Charity. The income tax rate is 100%.

The frighteningly efficient Argorinthian economy, worth a remarkable 2,713 trillion Drachmeis a year, is quite specialized and led by the Tourism industry, with significant contributions from Book Publishing, Information Technology, and Basket Weaving. State-owned companies are common. Average income is an amazing 238,626 Drachmeis, and distributed extremely evenly, with practically no difference between the richest and poorest citizens.

You're never too young to learn how to lie with confidence, the dessert 'Death by Chocolate' isn't the most lethal dish on the menu, proper policy proposals prerequire professional peer-reviewed papers, and the government is funding experimental battery technology while the power grid continues to crumble. Crime is totally unknown, thanks to a capable police force and progressive social policies in education and welfare. Argorinthia's national animal is the Dire wolf, which frolics freely in the nation's many lush forests, and its national religion is Argorinthian Reformed Protestantism.

Argorinthia is ranked 742nd in the world and 1st in Taijitu for Least Corrupt Governments, with 97.69 Percentage Of Bribes Refused.

Peoples Republic of TempleLandia, and