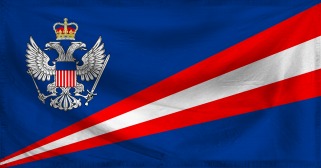 The Republic of Arconia Imperium is a colossal, safe nation, ruled by Galactic Emperor with a fair hand, and notable for its keen interest in outer space, multi-spousal wedding ceremonies, and suspicion of poets. The democratic population of 9.868 billion Arconians are fiercely patriotic and enjoy great social equality; they tend to view other, more capitalist countries as somewhat immoral and corrupt.

The medium-sized, socially-minded government juggles the competing demands of Defense, Industry, and Welfare. It meets to discuss matters of state in the capital city of Cydonia. The average income tax rate is 28.7%, but much higher for the wealthy.

The large but inefficient Arconia Imperiumian economy, worth 404 trillion Dollars a year, is fairly diversified and led by the Tourism industry, with major contributions from Cheese Exports, Pizza Delivery, and Automobile Manufacturing. State-owned companies are common. Average income is 41,008 Dollars, and distributed extremely evenly, with little difference between the richest and poorest citizens.

Arconia Imperium is ranked 126,398th in the world and 9th in Arconian Empire for Lowest Overall Tax Burden, scoring 64.93 on the Hayek Index.