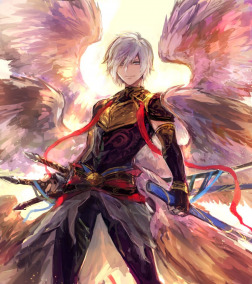 The Ascended of Heaven of Angel-20 is a massive, pleasant nation, renowned for its barren, inhospitable landscape, frequent executions, and ritual sacrifices. The hard-nosed, humorless, devout population of 2.054 billion Angel-20ians are prohibited from doing almost everything except voting, which they do timidly and conservatively.

The enormous government juggles the competing demands of Administration, Defense, and Law & Order. The average income tax rate is 61.6%, and even higher for the wealthy.

The Angel-20ian economy, worth 85.5 trillion bitcoins a year, is driven entirely by a combination of government and state-owned industry, with private enterprise illegal. However, for those in the know, there is a large, well-organized black market in Cheese Exports, Beef-Based Agriculture, Information Technology, and Furniture Restoration. The private sector mostly consists of enterprising ten-year-olds selling lemonade on the sidewalk, but the government is looking at stamping this out. Average income is 41,611 bitcoins, and distributed extremely evenly, with little difference between the richest and poorest citizens.

Cutting-edge missile systems are being retrofitted to twin-prop air force biplanes, people who stay late at the office often come home to find their own funeral being planned, tours to see the 'wild men of the mountains' are popular with tourists from the big cities, and concerned environmentalists wipe away their tears with tissues sourced from Tasmanian old-growth redwoods. Crime, especially youth-related, is almost non-existent, thanks to a very well-funded police force and progressive social policies in education and welfare. Angel-20's national animal is the wolf, which teeters on the brink of extinction due to widespread deforestation.

Angel-20 is ranked 45,926th in the world and 456th in Alliance of Supreme Powers for Most Avoided, scoring 67.16 on the Kardashian Reflex Score.