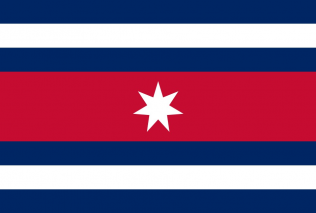 The Empire of Ammaroth is a massive, efficient nation, ruled by Primus Temperance Howell with a fair hand, and renowned for its museums and concert halls, smutty television, and daily referendums. The compassionate, hard-working, democratic population of 4.749 billion Ammarothis enjoy a sensible mix of personal and economic freedoms, while the political process is open and the people's right to vote held sacrosanct.

The large government juggles the competing demands of Education, Welfare, and Administration. It meets to discuss matters of state in the capital city of Arcadia. The average income tax rate is 91.7%.

The frighteningly efficient Ammarothi economy, worth 675 trillion Amaroes a year, is quite specialized and mostly made up of the Information Technology industry, with significant contributions from Tourism, Book Publishing, and Cheese Exports. State-owned companies are reasonably common. Average income is an impressive 142,316 Amaroes, and evenly distributed, with the richest citizens earning only 3.4 times as much as the poorest.

More than one company makes the board game Monopoly, police officers often conceal their identities to safeguard against public complaints, you can't put down the nation's attitude to pet health, and private pharmacies close down as medicinal drugs are given away freely by the government. Crime is totally unknown. Ammaroth's national animal is the Imperial wolfhound, which frolics freely in the nation's many lush forests.

Ammaroth is ranked 3,738th in the world and 102nd in the Pacific for Longest Average Lifespans, with 92.72 Years.