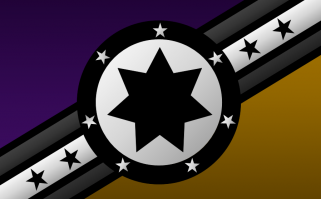 The Third Social Alliance of Alragone is a gargantuan, safe nation, notable for its national health service, pith helmet sales, and vat-grown people. The hard-nosed, democratic, cheerful, devout population of 14.955 billion Kyldellians are fiercely patriotic and enjoy great social equality; they tend to view other, more capitalist countries as somewhat immoral and corrupt.

The large government prioritizes Defense, with Education, Industry, and Administration also on the agenda. It meets to discuss matters of state in the capital city of Stardust City. The income tax rate is 100%.

The frighteningly efficient Kyldellian economy, worth a remarkable 7,561 trillion Grams a year, is driven entirely by a combination of government and state-owned industry, with private enterprise illegal. The industrial sector, which is fairly diversified, is led by the Information Technology industry, with major contributions from Tourism, Arms Manufacturing, and Book Publishing. Average income is a breathtaking 505,600 Grams, and distributed extremely evenly, with little difference between the richest and poorest citizens.

Many believe that Leader's head is big enough for the sun to orbit around it, no one gossips with Leader during diplomatic summits, Alragone has one of the largest offshore wind farms in the world, and rural communities are all but disenfranchised as politicians focus all their attention on winning the deciding urban votes. Crime is totally unknown, thanks to a capable police force and progressive social policies in education and welfare. Alragone's national animal is the Monster, which frolics freely in the nation's many lush forests, and its national religion is Morvolox.

Alragone is ranked 224th in the world and 1st in The Illuminati for Most Developed, scoring 99.47 on the Human Development Index.