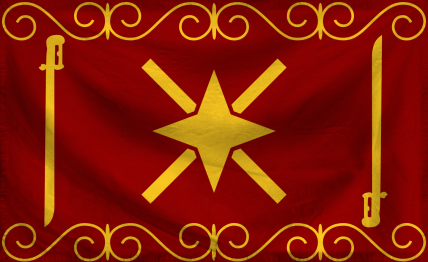 The Skaristannic Empire of Alicetopia is a colossal, socially progressive nation, ruled by Empress Elizabeth III with a fair hand, and renowned for its smutty television, otherworldly petting zoo, and sprawling nuclear power plants. The compassionate, democratic, cheerful, devout population of 5.083 billion Alicians are free to do what they want with their own bodies, and vote for whomever they like in elections; if they go into business, however, they are regulated to within an inch of their lives.

The large, liberal, socially-minded government juggles the competing demands of Education, Administration, and Industry. It meets to discuss matters of state in the capital city of Skarsten and Novisburg. The average income tax rate is 91.7%, and even higher for the wealthy.

The frighteningly efficient Alicetopian economy, worth 816 trillion Miribiluses a year, is driven entirely by a combination of government and state-owned industry, with private enterprise illegal. The industrial sector is led by the Information Technology industry, with major contributions from Tourism, Book Publishing, and Soda Sales. Average income is an impressive 160,718 Miribiluses, and distributed extremely evenly, with practically no difference between the richest and poorest citizens.

The mood of raunchy movies is often ruined by the sound of babies crying, Empress Elizabeth III's media campaigns take a hiatus around exam week, the minority inevitably have their addenda vetoed, and a recent political speech drew the ire of nerds everywhere after the speaker claimed that Darth Vader was Harry Potter's father. Crime is totally unknown. Alicetopia's national animal is the March Hare, which is also the nation's favorite main course, and its national religion is Julianism.

Alicetopia is ranked 279,825th in the world and 211th in The Free Nations Region for Greatest Rich-Poor Divides, with 1.28 Rich To Poor Income Ratio.

United mess of the jungle,