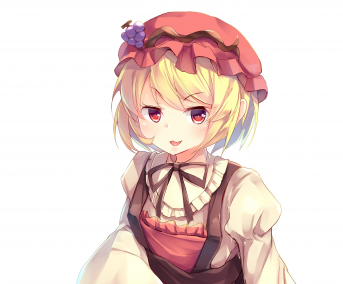 The Queendom of Aki Minoriko is a huge, efficient nation, notable for its museums and concert halls and frequent executions. The hard-working, democratic, devout population of 835 million Aki Minorikoans hold their civil and political rights very dear, although the wealthy and those in business tend to be viewed with suspicion.

The relatively small, outspoken government prioritizes Spirituality, although Education, Welfare, and Industry are also considered important. It meets to discuss matters of state in the capital city of Youkai Mountain. The average income tax rate is 16.3%.

The very strong Aki Minorikoan economy, worth 54.2 trillion ryoes a year, is fairly diversified and led by the Information Technology industry, with major contributions from Book Publishing, Automobile Manufacturing, and Pizza Delivery. Average income is 64,963 ryoes, and evenly distributed, with the richest citizens earning only 4.6 times as much as the poorest.

Wildlife near farms is slowly becoming extinct, the entire entry for Aki Minoriko in the Hitchhiker's Guide to the World reads 'mostly harmless', everybody's got wood thanks to Leader, and paranoid museum guards keep a lookout for any animated displays attempting to escape the premises after dark. Crime is relatively low. Aki Minoriko's national animal is the eagle.

Aki Minoriko is ranked 204,386th in the world and 2,543rd in Ambition for Largest Gambling Industry, scoring -3.82 on the Kelly Criterion Productivity Index.