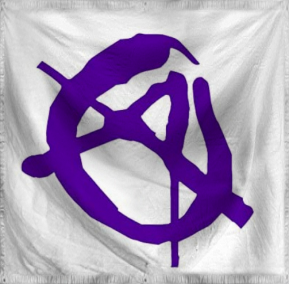 The Black District Motto of Adapt or Die is a gargantuan, genial nation, ruled by Antifa with a fair hand, and notable for its rampant corporate plagiarism, aversion to nipples, and complete lack of prisons. The compassionate, hard-working, democratic, humorless population of 22.539 billion Adapt or Dies hold their civil and political rights very dear, although the wealthy and those in business tend to be viewed with suspicion.

The medium-sized, corrupt, liberal, outspoken government juggles the competing demands of Industry, Administration, and Education. It meets to discuss matters of state in the capital city of Nowhere and Everywhere. The average income tax rate is 70.4%, and even higher for the wealthy.

The frighteningly efficient Adapt or Diean economy, worth a remarkable 5,920 trillion Purple Medallions a year, is driven entirely by a combination of government and state-owned industry, with private enterprise illegal. However, for those in the know, there is an enormous, deeply entrenched, quite specialized black market in Information Technology, Book Publishing, Retail, and Soda Sales. The private sector mostly consists of enterprising ten-year-olds selling lemonade on the sidewalk, but the government is looking at stamping this out. Average income is an amazing 262,694 Purple Medallions, and evenly distributed, with the richest citizens earning only 2.2 times as much as the poorest.

Every workday begins with group therapy, citizens are permitted to carry concealed handguns, Adapt or Die Barrier Island residents anxiously await their 'Bridge to Somewhere', and workers have seized control of the economy. Crime, especially youth-related, is all-pervasive, perhaps because of the country's complete lack of prisons. Adapt or Die's national animal is the Black Falcon, which soars majestically through the nation's famously clear skies, and its national religion is Atheism.

Adapt or Die is ranked 245,779th in the world and 785th in NationStates for Largest Timber Woodchipping Industry, scoring -9.59 on the Tasmanian Pulp Environmental Export Index.

Most Recent Government Activity: 34 minutes ago