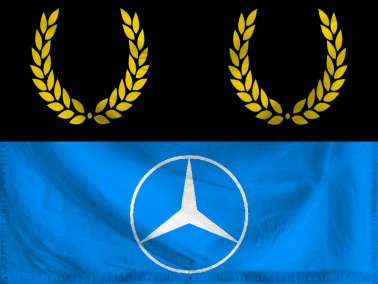 The Montferrati Dominion of Achaian Morea is a gargantuan, cultured nation, ruled by King Nico Baumbach with an iron fist, and renowned for its public floggings, compulsory vegetarianism, and prohibition of alcohol. The hard-nosed, cynical, humorless, devout population of 12.83 billion Montferrati are ruled without fear or favor by a psychotic dictator, who outlaws just about everything and refers to the populace as "my little playthings."

The large, corrupt, moralistic, socially-minded government is primarily concerned with Defense, with Law & Order, Education, and Spirituality also on the agenda, while Social Policy is ignored. It meets to discuss matters of state in the capital city of Riesa. The average income tax rate is 99.2%.

The frighteningly efficient Montferrati economy, worth a remarkable 5,265 trillion crowns a year, is driven entirely by a combination of government and state-owned industry, with private enterprise illegal. However, for those in the know, there is an enormous, deeply entrenched black market in Arms Manufacturing, Information Technology, Uranium Mining, and Beef-Based Agriculture. The private sector mostly consists of enterprising ten-year-olds selling lemonade on the sidewalk, but the government is looking at stamping this out. Average income is an amazing 410,442 crowns, and evenly distributed, with the richest citizens earning only 2.3 times as much as the poorest.

Workers have seized control of the economy, candidates for public office painstakingly research their family trees to ensure their eligibility, Riesa is a police state during international summits, and you're never too young to learn how to lie with confidence. Crime, especially youth-related, is totally unknown, thanks to a very well-funded police force and progressive social policies in education and welfare. Achaian Morea's national animal is the swan, which frolics freely in the nation's many lush forests, and its national religion is Christianity.

Achaian Morea is ranked 755th in the world and 2nd in Esamir for Highest Poor Incomes, with 265,006.29 Standard Monetary Units.