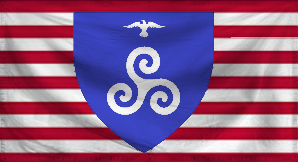 The Celtic Empire of A Cornstar is a colossal, environmentally stunning nation, ruled by IACOBVS REX with an even hand, and notable for its zero percent divorce rate, ubiquitous missile silos, and compulsory gun ownership. The hard-nosed, devout population of 8.531 billion Cornoes are fiercely patriotic and enjoy great social equality; they tend to view other, more capitalist countries as somewhat immoral and corrupt.

The relatively small government juggles the competing demands of Education, Defense, and Administration. It meets to discuss matters of state in the capital city of Cornstarntinople. The average income tax rate is 31.7%, but much higher for the wealthy.

The frighteningly efficient Corny economy, worth a remarkable 1,215 trillion Good Boy Points a year, is broadly diversified and led by the Arms Manufacturing industry, with major contributions from Tourism, Information Technology, and Book Publishing. State-owned companies are common. Average income is an impressive 142,492 Good Boy Points, and evenly distributed, with the richest citizens earning only 2.8 times as much as the poorest.

The "do ya feel lucky, punk?" scene is on the core syllabus at the National Police Academy, thieves find battery shops juicier targets than banks, populations of two-headed Eagles have been found around recently-uncovered archaeological sites, and crime is on the rise as online youths compete to vlog the most shocking scenes of violence. Crime, especially youth-related, is totally unknown, thanks to a capable police force and progressive social policies in education and welfare. A Cornstar's national animal is the Eagle, which soars majestically through the nation's famously clear skies, and its national religion is Chalcedonian Christianity.